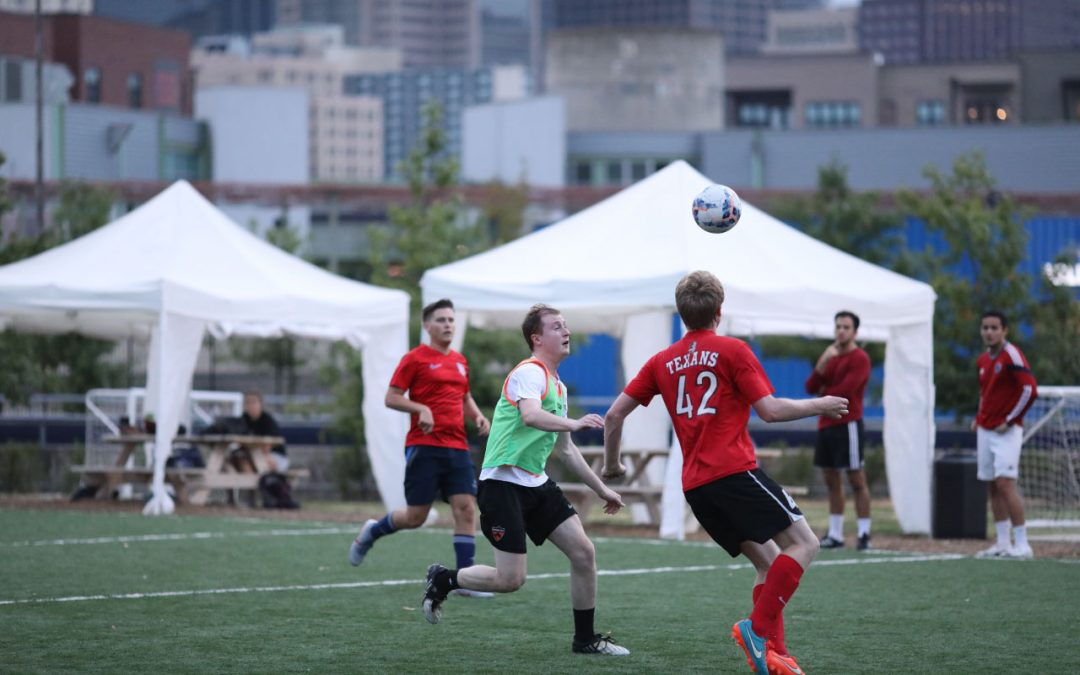 Open Competitive –
For highly-skilled, competitive teams/individuals, best suited for teams/players who have played soccer at an organized level and are interested in an intense game. (18 and older, any gender)

Open Intermediate –
Best suited for players with some experience in organized soccer or not interested in a highly intense game (18 and older, any gender)

COED Competitive & Intermediate –
For players who want to play in a coed setting, and the same differentiation as between Open Competitive and Open Intermediate (18 and older, minimum of two female players on the field at all times)

Competitive Balance
Teams are strongly urged to enter into the proper level of competition.

5v5, one of whom is the goalkeeper
The minimum number of players to start a match is 3 (one needs to be GK)

Roster size: Max 12 players – Players must be on the team’s roster to play. Rosters will be checked before each playoff game. Players cannot be on two rosters in the same league. Players may guest play on another team with the opposing team’s consent; no guest players are allowed in playoff games.

COED Leagues: 2 female players on the pitch at all times; otherwise, play one down.

Rosters are frozen after week 4

Players on the same team must wear the same color jersey (no numbered jerseys required). All teams need an alternative color in case of conflict. Cleats are allowed. Shin guards are not mandatory but recommended.

Game Ball:
Size 5 – Each team must provide a game ball for game time.

Referees must sign and complete a game report sheet indicating the final score and report any game incidents involving player, coach, or spectator misconduct (red and yellow cards).
An Incident Report must be written if a player is injured.

Referee Fees: Teams pay the referee $15 each before starting the game in cash, with CashApp or Venmo. Games can’t start until referee fees are paid.

Note: All players on the field at the end of the game MUST remain on the field; Other players remain off the field. If a team plays one down due to a red card, a substitute player must be added to complete five to take a penalty kick. If there is no substitute, then only four take the penalty kicks.

Team Captains will submit the order in which their players will take the penalty kicks.

Fouls are penalized with a direct free kick for tripping, pushing, shoving, holding, slide tackling, charging, and striking an opponent for handling the ball deliberately (except for the goalkeeper within their penalty area) unsportsmanlike conduct.

Fouls penalized with an indirect free kick for:
1. goalkeeper touches the ball with their hands in the penalty area after being passed to them by a teammate.
2. for dangerous play and obstruction.
3. Infringement in distance on restarts.

Note: All Leagues, no matter how competitive, are FUN Leagues – Players will receive yellow or red cards for aggressive and violent play and unsportsmanlike conduct.

Red Cards can be: (a) a straight red or (a) two yellow cards.

A player ejected from a game must leave the facility.
A player who receives a straight red card automatically sits out his team’s next scheduled game.
A player receiving a red card for two yellow cards will not have to sit out a game.

Any player who is physically aggressive towards a referee (i.e., pushes, shoves, punches, kicks) will be suspended from the league indefinitely pending a hearing with the League Office and fined $100.

The ball must be on the touchline or behind it, not moving. The player spots the ball with one hand to ensure it’s in the right spot and not moving and then kicks in. Infringement is penalized by awarding the kick-in to the opposing team. – Cannot score directly from a kick-in.

*A goal clearance is awarded if the ball enters the opponent’s goal.

Five meters on all kick-ins, corner kicks, and free kicks. 3 meters on kick-offs. Infringement is penalized with an indirect free kick from the spot of the infringement.

To be eligible for the playoffs, they must be on the team roster by week 4.
A formal protest may be filed before a game if an opposing player’s eligibility is questioned. The player in question will be required to provide their player information (name, address, phone #) in writing to the referee or a City Futsal staff member before the start of the game. This qualifies as an official protest. The game will then be played as scheduled. Teams will be notified of all rulings on the eligibility discrepancy. Decisions will not be made on site. If the protest is proven legitimate, it will result in the forfeiture of the game in question.

The above procedure will also apply to any other logged protests. All rulings by City Futsal staff are considered final.

The objective of the leagues is to have fun. Although the games may become intense, you can still be competitive while maintaining good sportsmanship. Any behavior deemed unacceptable by the referee or staff may result in suspension or ejection from a game or the league.

Leagues may be canceled due to weather conditions. Thunderstorms with lightning 9 miles or less or torrential rain cause game suspension or cancellation. We will not cancel games until necessary, and decisions are made an hour before game time. Canceled games may be made up on days other than those when games are typically played on. In extreme circumstances, City Futsal reserves the right to run a shortened season without a refund.

Any match called before being an official game will be replayed in its entirety.

A match is considered official if it is called after the first half has been played.

City Futsal reserves the right to schedule makeup games or playoff games on days other than your regularly scheduled games.

Teams unable to play a scheduled game will forfeit, and the score will be recorded as 0-3 against them. A team that forfeits a game must pay a fine of $30, payable within 24 hours of the forfeited game. Failure to pay the fine will result in spending any future games, resulting in forfeits.

Must be done in writing by email to federico@cityfutsal.com. If the complaint is about what occurred during a game, please wait to submit it 48 hours after the game.