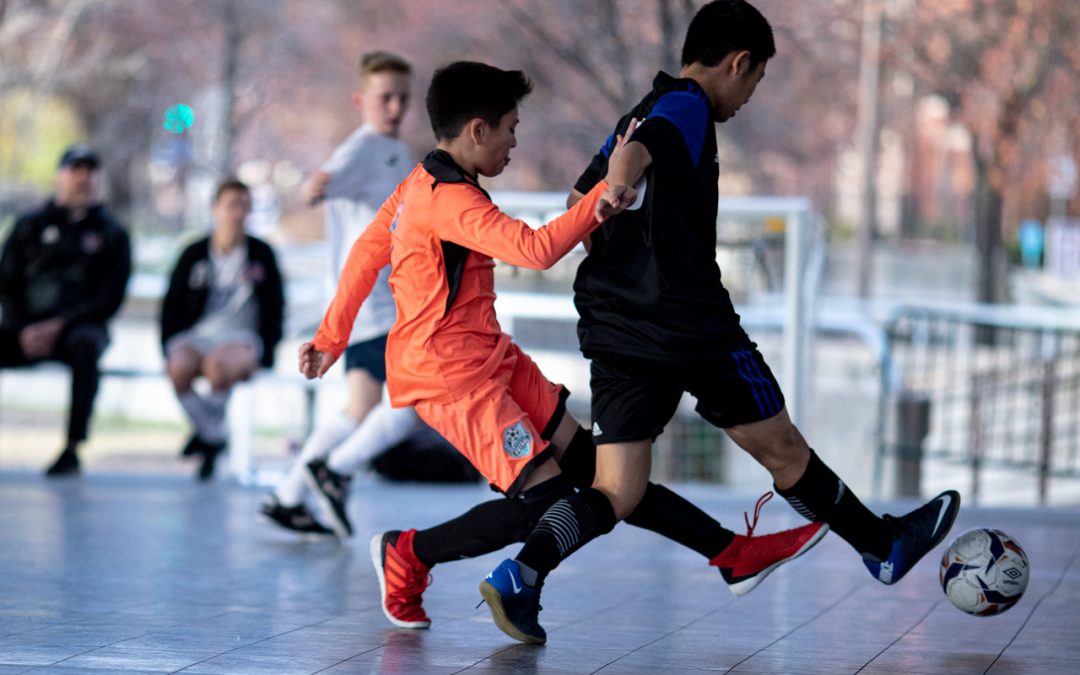 A match may start if either team has a minimum of 3 players. (one of which needs to be a keeper)

Game Duration – Two, 20-minute halves, running clock, except for last 2 minutes at the end of the second half (stop-clock when the ball is out of play and if the game is within 3 goal differential). 3-minute halftime.

Teams will not switch benches or sides at halftime. Each team’s bench will stay in their defensive half for the entire match.

Four seconds on all restarts – Restarts are: kick offs, kick ins, corner kicks, goal clearance, free kicks. Referee visibly performs the count, except on Indirect Free Kicks, where the count is not visible.

– When the keeper saves the ball and prevents it from going out of bounds, they can then play it anywhere on the court with hands or feet..
– When the ball goes out of play, the keeper must then play the ball with their hand on their side of the court first.
*Infringement of this rule is penalized with an indirect free kick at the halfway line.
– Ball can be played to a teammate within the penalty area. Opponents must be outside of the penalty area during a goal clearance.

Pass Back to the Goalkeeper Rule – Once the keeper plays the ball, it cannot be passed back to them unless there is a change of possession at which point it can be played back. Infringement of this rule is penalized with an indirect free kick at the spot where the keeper touches the ball. If it occurs inside the penalty area, the indirect free kick is taken from the edge of the penalty area.

Substitutions – Unlimited and are done on the fly within the team’s substitution zone.

Procedure: The substitute enters the pitch only after the player being replaced is off the court. Infringement of this rule is penalized with an indirect free kick from the position of the ball at the time of the infringement.

NOTE: Substitution of goalkeeper is the same as with any other player.

Kickoffs – taken at the start of the game, the start of the second half, and after a goal has been scored. All players, except the player taking the kick-off, must be in their own half of the pitch. The ball is in play when it is kicked and clearly moves. The ball can be played in any direction. – A goal CAN be scored directly from a kick-off.

Kick-Ins – The ball must be stationary on or behind the touchline. Infringement is penalized by awarding the kick-in to the opposing team. – Cannot score directly from a kick-in.

Corner Kicks – Same as with kick-ins – Can score directly from a corner kick.

Four Seconds on all Restarts – Restarts are kick-offs, kick-ins, corner kicks, goal clearances, free kicks. The referee visibly performs the count, except on Indirect free kicks, where the count is not visible.

Uniforms – Players on the same team must wear the same color uniforms — Shin guards and footwear with flat soles (no turf shoes allowed). The goalkeeper’s uniform must be a distinctly different color from that of his team and the opposing team. The home team changes color in case of conflict. All players must wear numbered jerseys. No two players on the same team may have identical uniform numbers.

– A player wearing a soft cast is permitted to play with the permission of the referee. – Hard casts are not permitted.

Time Outs – Each team has ONE timeout per half and can only be taken when in possession of the ball and it’s out of play.

NOTE: Referee can ask for a time out at his discretion at any time (injury, delay of game, or other) Home Team – The team listed first on the schedule is the Home team.

Fouls penalized with a direct free kick for:

All the above are considered accumulated fouls, and direct free kicks are taken from where the offense occurred.

Fouls penalized with an indirect free kick for:

– Passback to the Goalkeeper Rule Infringement.
– Goalkeeper handling the ball in his own half for more than 4 seconds.
– Goalkeeper touches the ball with their hands in the penalty area after being kicked to them by a teammate.
– Goal clearance violation.
– For playing the ball twice by the same player on kick-ins and corner kicks.
– For dangerous play and obstruction.
– For illegal substitutions.

Yellow Cards are not accumulated from game to game. A straight Red Card is an automatic one-game suspension to be served the next scheduled match.
Note: Depending upon the severity of the unacceptable conduct, a suspension for more games may be assessed.

If a team does not report for a match, plays a match with an ineligible player, or if a team reports to the match with less than 3 players and it is 10 minutes past the scheduled start time, except in cases of force majeure, the team will be considered as having forfeited the match, and 3 points will be awarded to the opponent with the score of 3-0.

In the case of an abandoned match where the game has started, and a team refuses to continue to play, The opponent will be awarded the win with a score of 3-0 or with the score at the time of abandonment, whichever the winning team chooses.

Standings in a division or pool will be determined by:
– 3 points for a win
– 1 point for a tie
– 0 points for a loss

Divisions with 4 teams – 1 pool
Each team plays each other once. The 1st and 2nd place teams advance to the final.

Divisions with 5 teams – 1 pool
Each team plays each other once in pool play. The team with the most points and the second most points will advance to the final.

Divisions with 6 teams – 2 pools of 3 teams
Each team plays the teams within their pool. The 1st and 2nd seeded teams in each pool advance to the semifinals. 3rd place teams play a consolation match. Winners of semifinals advance to the finals.

Divisions with 8 teams – 2 pools of 4 teams
Each team plays the teams within their pool. The 1st and 2nd seeded teams in each pool advance to the semifinals. Winners of semifinals advance to the finals.

Note: all players on the court at the end of the match must remain on the court while all other players must remain off. Team captains will submit to the referee the order in which the players will take the penalty kicks.

A formal protest may be filed before a game if an opposing player’s eligibility is in question, and must be provided in writing to the head referee. This qualifies as an official protest. The game will then be played as scheduled. Teams will be notified of all rulings on the eligibility discrepancy. If the protest is proven to be legitimate, it will result in the forfeiture of the game in question.