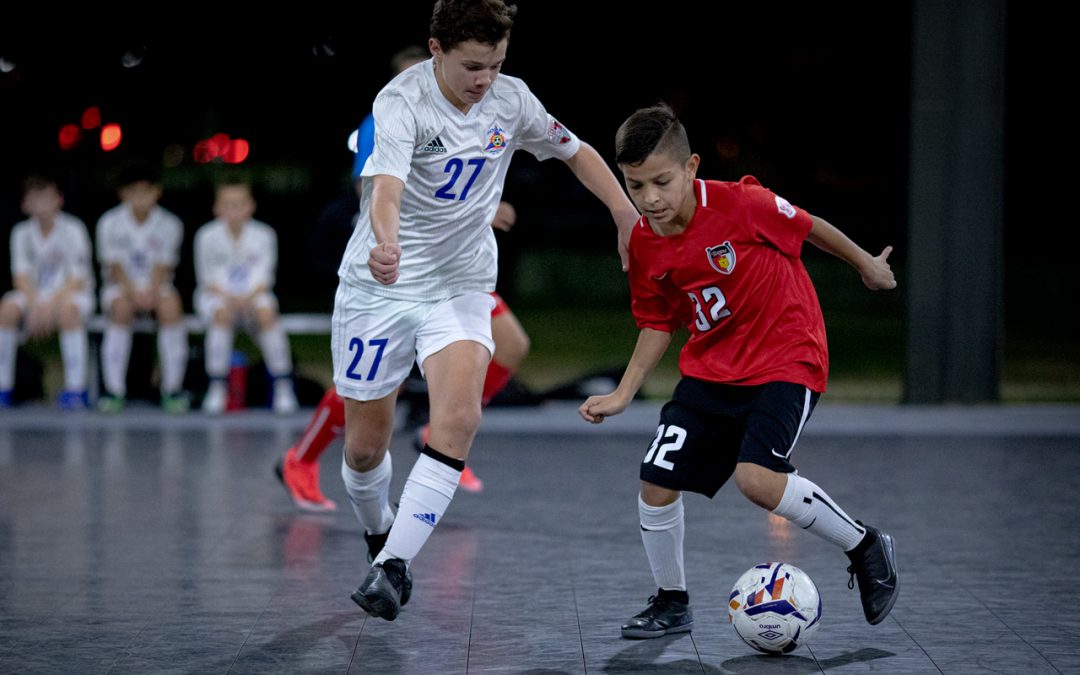 A match may start if either team has a minimum of 3 players.

Roster size: 12 players max can be suited to play in a game. Can have up to 3 guest players per game. All players must be registered on a roster.

Pass Back to the Goalkeeper Rule – once the ball is played by the goalkeeper, the ball cannot be passed back to him/her unless there is a change of possession: An indirect free kick is awarded against the team for this violation at the spot where the goalkeeper received the pass back Note: if received inside the penalty area, the indirect free kick is taken at the edge of the penalty area

Substitutions – Unlimited and on the fly. Must enter and exit between the substitution zone lines, AND the incoming player cannot step on the court until their teammate is off. Penalized with an indirect free kick if a substitution is not done properly, taken from the spot where the ball was at the time of the illegal substitution.

Note: Substitution of goalkeeper is the same as with any other player.

Five Meters Distance on all restarts – The distance defending players need to keep on all restarts (kickoffs, kick-ins, corner kicks, goal clearances, and free kicks. The defending team cannot invade that space until the ball is played. The referee will enforce and not allow for play to start unless the proper distance is observed and unless the attacking team opts to play quickly

Kickoffs – At the start of the match, taken by the home team. The ball is in play when the ball is kicked and moves. The referee must signal with a whistle for the start.– A goal MAY be scored directly from the kickoff.

Kick-Ins –  The ball must be on the touchline or behind it and stationery. The player spots the ball with one hand to ensure it’s in the right spot and not moving and then kicks in. Infringement is penalized by awarding the kick-in to the opposing team. – Cannot score directly from a kick-in.

*A goal clearance is awarded if the ball enters the opponent’s goal.

Corner Kicks are the same as kick-ins, except that infringement is penalized with a goal clearance – One can score directly from a corner kick.

Goal Clearance the goalkeeper must play the ball with their hands and on their own half to restart play An indirect free kick at the halfway line is awarded if the ball is played directly over the halfway line. A goal may not be scored directly from a goal clearance.

NOTE: if the Goalkeeper saves the ball, preventing it from going over the goal line, they can play it anywhere on the court with their hands or feet. Punts and drop kicks are allowed, and you can score directly by these means; CANNOT score directly with a throw

Score Table is & Game Time – The referee manages both the score table and keeps time.

Uniforms – Players on the same team must wear the same color uniforms — Shin guards and footwear with flat soles (no turf or cleats allowed). The goalkeeper’s uniform must be a distinctly different color from that of his team, the opposing team, and the referees. The home team changes color in case of clashing colors. For league play, uniform numbers aren’t mandatory. For tournaments, All players must wear numbered jerseys, and no two players on the same team may have identical uniform numbers.

– A player wearing a soft cast is permitted to play with the referee’s permission.
– Hard casts are not permitted.

The referee’s whistle indicates the start and end of each period.

Time Outs – Each team has ONE timeout per half and can only be taken when in possession of the ball and it’s out of play.

NOTE: The referee can ask for a time-out at his discretion at any time.

All the above are accumulated fouls and direct free kicks taken from where the offense occurred.

Fouls penalized with an indirect free kick for:
– Pass back to the Goalkeeper Rule violation

– The goalkeeper handles the ball in their half for more than 4 seconds.

– Goalkeeper touches the ball with their hands in the penalty area after the ball is passed to them by a teammate, including on kick-ins
– Goal clearance violations

– For touching the ball a second time before another player does on kick-offs, kick-ins, corner kicks, goal clearances, and free kicks

– For dangerous play and obstruction

A player or a coach can commit this type of foul. It does not involve player contact or the ball but is about sportsmanlike behavior and game manners’. Foul language, obscenity, obscene gestures, and even arguing can be considered technical fouls. A player, manager, or coach ejected will have an automatic minimum one (1) game suspension regardless of the cause of the ejection. Depending upon the severity of the unacceptable conduct, suspensions for more games may occur.

Yellow Cards are not accumulated from game to game. If a Red Card is given to a player/coach and sent off, they must leave the court and cannot remain on the bench. A game suspension is served during the next scheduled match.

Players, managers, coaches, and fans are expected to conduct themselves in a sportsmanlike manner. League Staff has the authority and the responsibility to remove any person(s) from the facility for conducting abuses. The team manager/coach will be responsible for their fans’ behavior. The referee will have the authority to warn and ultimately send off any manager/coach and the fans who behave in an abusive or disruptive manner.

A forfeited game will also result in a fine of $45 to be paid immediately.